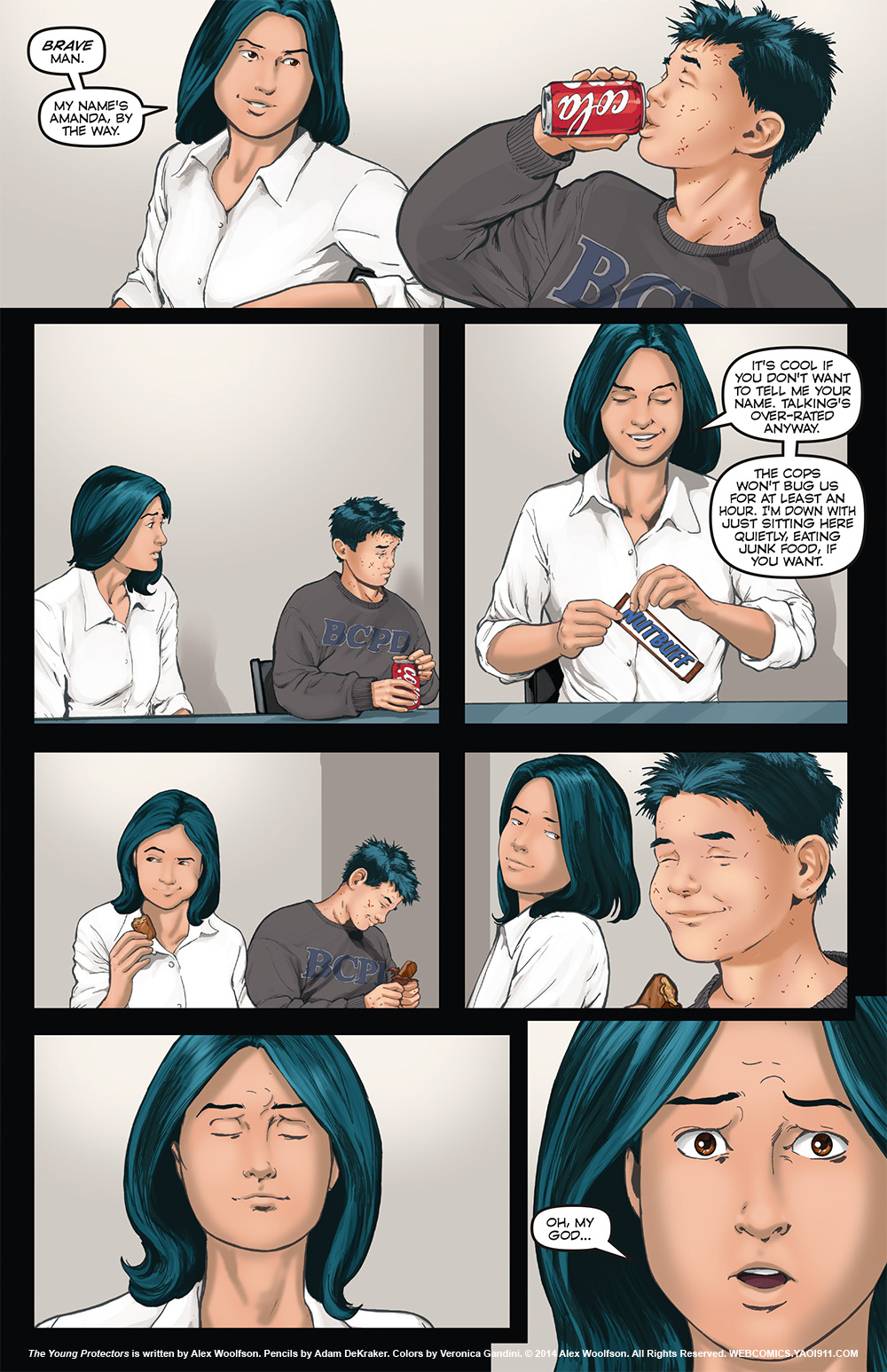 Liked it? Take a second to support Froya H on Patreon!

MY NAME’S AMANDA, BY THE WAY.

IT’S COOL IF YOU DON’T WANT TO TELL ME YOUR NAME. TALKING’S OVER-RATED ANYWAY.

THE COPS WON’T BUG US FOR AT LEAST AN HOUR. I’M DOWN WITH JUST SITTING HERE QUIETLY, EATING JUNK FOOD, IF YOU WANT.

Hmm… I wonder what she saw…

Big hugs go out to long-time friends of The Young Protectors Cassandra S., & Robert B. for their super-generous $25 donations! And this makes Cassandra’s nineteenth & Robert’s sixty-fourth super-generous donations to this comic!

Thank you all so much for your generous support!

So! Spooky has gotten to enjoy a little more chocolate and Amanda has finally had a chance to use her powers again. I wonder what she’ll learn from that?

Tune in this Wednesday to find out! Hope to see you there! 😀

Exactly what I was thinking, Saxon!

As cliffhangers go, …its bearable. We have to finish recovering from all the ones last year

I think she just saw what he went through….

Or that he have other pleasure sources in mind…

Yeah, I think that’s the simplest explanation. Barring an unexpected plot twist (which we should not dismiss considering who’s doing the writing) I expect that now that she’s gotten him feeling better she can take time to read something other than surface thoughts and immediate needs.

Thank you Alex. You, Adam and Veronica bake the tastiest pages in town. I’d like to order a baker’s dozen… please.

FYI — Spooky and Amanda are so fun together I’m worried that, I might start shipping them.

I just want to say that if you make this gay man start rooting for Spooky not to be gay… well we’re talking END OF DAYS, ARMAGEDDON, CATS & DOGS LYING DOWN TOGETHER… so please don’t overdo the adorability.

I may be gay and I may love me some Spooky… but I’m only human. 🙂

OMG! Chris, are you becoming a skipper!!! That´s so faw of you!
(this is how teengirls talk, right?)

I have no idea what a skipper is. Someone on a boat maybe? Or maybe my fingers got ahead of me and I meant shipper 😉
It´s hard talking teen! How do they do that?

Jupp, I am the sneaky one 😀

Well true on the sneaky. I’m with you on the teen part. Everyone under twenty looks 12 to me now. How sad… My limit of cool kid speech is already old… “teh awesome”… how sad.

As long as you never say “teh awesome” to me, I have no problem with you being a non teen!
As for the not dating part. I would not mind having the same hugging person in bed everynight. Sounds easyer then hunting for a new hugging person everytime I need one.

There is truth in what you say. I will attest to this. 😀

I am not certain anyone has explained this, the trick when hunting down a hugging person in bed, is to release them when you are done.

But if you let them go , you can leave a bowl of food by the door, and they may just hang around. Then you dont needs maps, and ammo and camoflauge ( well maybe a little camouflage ) .

Its just a thought

Wow, Thank you Mr. Black. This are useful tips.

Now what kind of camoflauge should I use. The “I am so innocent” or should I go for the sexy nurse thing.or I could try for the “I am a geek so I know what you talking about”-look. I like that last look feels more like me.

I thought you were going to say that SKipper was for shipping Spooky and Kommander. 😉

Alex, do you have the same powers as Amanda? I think you read my mind, for that is so what I meant 😀

Come.
Come to the straight side…. wait, that didn’t come out right.

( Unless, you are ironically pantomiming a confused Heterosexual in a camp manner* ; One who has been sadly tricked into a suffocating straightjacket of sexual-orthodoxy , under self-stifling definition of “straightness” ) , ….. Like Hell, I did!
@chrisdangerfield:disqus

*and that is still something *I* would never do, among other reasons, Adam doesnt do camp, or other embodiments of Queer-theory.

That’s why I identify as Bent. Which means, among other things :quoteth http://www.thefreedictionary.com/bent:

noun.
4. predilection; talent: a bent for painting.
5. capacity of endurance.

(informal), predisposed to, obsessive about, fixated on, resolved on, insistent on

and deny being “bent”, Just dont those words in my mouth.

Any Heterosexuals reading this, who like the idea of “Bentness”, you are welcome to join. It is an umbrella label for sexually-heterodox. There are no tests, no dues, an UN-label. But it does mean not-so-straight.

If you are heterosexual, and certain you are not bent. There are much better English metaphors then the flavorless “straight”, to describe beautiful heterosexual Love.

For example “Complementary”
: completing something else or making it better : serving as a complement

: going together well : working well together

The notion of the pair or “syzygy” is central to Valentinian thought. The
term refers to the linking together of complementary qualities (“Aeons”) of
to form a state of wholeness (pleroma). This is the highest level of reality.
The halves of a syzygy are often refered to as male and female

Thats Perfect! Instead of invoking a metaphor of strict linear morality for sexuality, (implying others dont measure up ) you can invoke the motion of the earth and moon ,in perfect conjunction.

(Jungian psychology) “an archetypal pairing of contrasexual opposites, which symbolized the
communication of the conscious and unconscious minds, the conjunction of
two organisms without the loss of identity.”

So…syzygy represents a pair of connected or correlative things, a couple, or pair of opposites

My work is done.

other defintions:
http://en.wiktionary.org/wiki/syzygy
(astronomy, astrology) A kind of unity, namely an alignment of three celestial bodies (for example, the Sun, Earth, and Moon) such that one body is directly between the other two, such as occurs at an eclipse.

(medicine) The fusion of some or all of the organs.

(zoology) The association of two protozoa end-to-end or laterally for the purpose of asexual exchange of genetic material.

(zoology) The pairing of chromosomes in meiosis.

TLDR, but whatever he says…

Hehe. I’ll take that as a compliment. And a fun challenge… 😉

Edit: It’s a sucker bet… Alex knows I just want my Spooky to be happy… even if it’s a bitter pill to swallow. LOL.

There was no challenging there. Was it?

Oh THAT! Exactly that! Thanks. 🙂

My favorite scene in the entire movie. Of course your comment sent me straight to Youtube to find it. 🙂

A nice little joke from our Alex, for sure!

“OH MY GOD! We left Tsunami at the Dairy Queen!”

I miss him, the others too but I desperately wanna know more about him?!

Omg it’s posted so early!! I love it!! *bounces around* XD
O.O….I’m guessing she just read his mind, and that she needed him to relax to be able to do so…?….ack! my mind is trying to problem solve again! XD lol.
P.S….Spooky is sooo cute! ^^

I’m a little scared of what she might have saw. And I wonder if Spooky has his barriers up, if there is such a thing. He and Amanda talk, eat candy, drink coke, joke a little and his barriers start to go down.

Then Amanda sees IT. Whatever IT is.

Yep, a little scared am I.

The real issue here is that now we have canonical proof that chocolate lowers your telepathic barriers and makes you vulnerable to cootie carrying femme fatales with chocolate & cola. See, I knew our Spooky was in trouble and she was just working her way in.

I knew he should have stayed gay! Well he’s just lucky that I’m not one of those who thinks it’s a choice. LOL.

You think the nuffbluf turned him straight?

Amanda’s look of horror has to be about SOMETHING?

Are you certain it’s not having left the garage door open?

So, are we hypothesising that Spooky’s magery is at least partly innate rather than soley from training? (which would explain how he can be so proficient at such a young age, and might also explain we he was sacrified as a ‘being of power’ to Hell in the first place). Hmm, get him relaxed and his defences come down. Further hmm, that would mean that they protected his deeper thoughts, but not his surface thoughts so that Amanda could read his need for chocolate…

I’m thinking it’s innate. It would seem to me that he would have some natural powers to begin with and, possibly, they weren’t obvious until he started hitting puberty.

Your comment about him being “sacrificed” has given me good food for thought. That is, who did it, how it was done, and why? And the most important question, how did he get out because it seems he managed that feat on his own powers.

Do you suppose that Amanda forgot to turn off the stove? Or maybe to lock the door? Maybe she forgot to buy the paper towels?

No spoilers, AJ! You promised!

Shhhhh! Not supposed to talk about those.

So you mean that is only we who knew about the ferris wheel also?

o.O Ferrets on a ferris wheel? Who’s your source?

The visual on that is just…adorable! All that turning, leaping around, music. And a beautiful warm night to enjoy it all.

Wait? Are we talking about the Flying Robot Ninja Ferrets?

No victorian steampunk ferrets on a ferris wheel.

Oh… I got confused. So the ferrets carry little vibranium umbrellas.

That we’re not supposed to talk about. 🙂

Exactly what? (“Yes, I have an Exactlywhat on a chain.”)

That we don’t talk about the Plushie Victorian Steampunk Ferrets on a Ferris wheel with Virbranium Umbrellas. 🙂

*innocent look* What Plushie Victorian Steampunk Ferrets on a Ferris Wheel with Vibranium Umbrellas? I haven’t the faintest notion what you’re talking about.

Only the cool ones.

Ferrets. On the ferris wheel wearing small hats with feathers which delicately fly in the breeze…

The costume designers are just amazing.

Dang‼ I knew I should have put ferret in my spoiler filter!

There ferrets. I want a ferret, WHERE ARE THE FERRETS.

After Alex updates Twitter, RSS, Tumblr, Facebook, VariousRelatives, TheGuyAtTheSandwichPlace and some social media we don’t even know about…

On a steampunk ferris wheel with little hats with feathers. WANT!

A ferret for each TYP. It’s a whole set!

Think Alex will make them a stretch goal for the next Kickstarter?