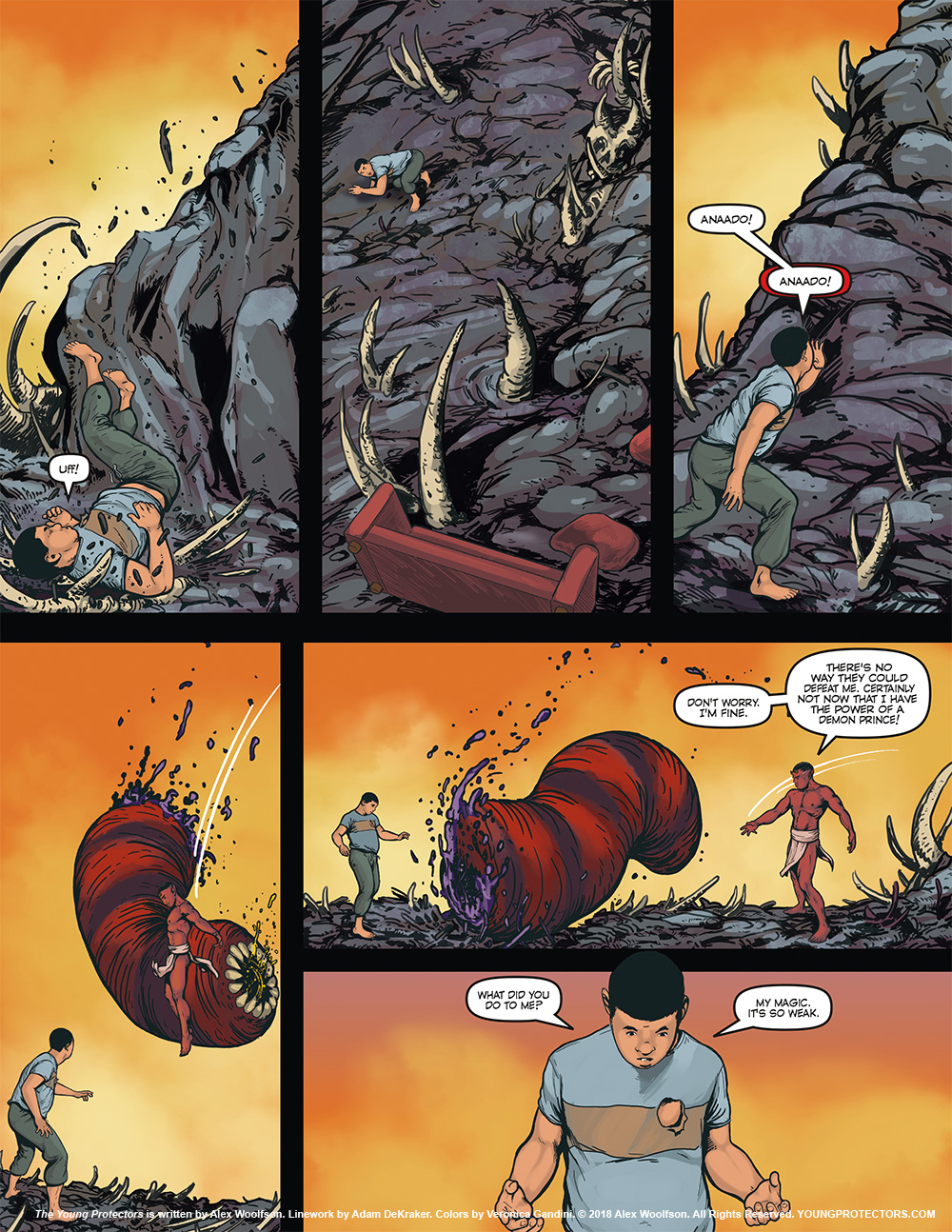 THERE’S NO WAY THEY COULD DEFEAT ME. CERTAINLY NOT NOW THAT I HAVE THE POWER OF A DEMON PRINCE!

WHAT DID YOU DO TO ME?

Liked it? Take a second to support Teri D. on Patreon!

We were all very worried for you, Anaado. Really.

And in other news, it looks like Comixology is including Artifice and The Young Protectors: Volume One in a big sale they are having from August 24th through September 6th—”Massive Indie Sale, Part 1.” Comixology has some cool technology that makes reading comics on a computer or mobile device much more pleasant. Give it a look.

So! Looks like Anaado is making good use of Kyle’s power. Or, perhaps we should say, good and evil use, depending on what he did to Spooky. But what did he do exactly? How has it affected Spooky’s powers? And what is he going to do next?

Tune in this Saturday to find out! Hope to see you there! 😀

Talk about this page right now at the Young Protectors Community

(Disqus Comments Can Be Found Below)

At least he has a sofa to sit on. That is more than he had the first time, seven years ago.

That was a steep hill. Filled with pointy bones that could have impaled Spooky. -_-

He neither landed on the sharp bones nor on the comfy couch. Neither as bad or as good as it could have been.

If it is, Spooky can now tell everyone that Anni is faking the memory loss

It could still be a different one, but there’s a plausibility, at least…!

If youngcan remembered i think hed freak out at being so weak.

Oh, that poor couch. You had to remind us again, how its ill fated. At least Spooky has a pretty good chance, but that couch is done.

All this action on the page, and I can’t help notice Anaado is looking mighty fine >.>

Why do I get the feel Anaado did the spell, just to break Spooky (physically or psychologically). On another note, he is drunk on demon prince power.

It seems Spooky didn’t completely realize that he was turned into a teen again?
My guess would be that his magic also turned back to it’s state of when Spooky was 13? But his mind did stay the same, so it’s not an automatic “complete” turnback like we might have seen with Duncan (if he really didn’t play the part that is) hopefully this whole thing can be easily undone >_____>
And I still wanna know what’s up with KYLE, WHEN DO WE GET INPUT ON HIM, ALEX!!!!

Anaado flexes his new magic muscles in a deathly display of wormy death and smug revenge. But “Danger! Will Robinson! Danger!” what is the karmic payback for arrogance and scorn?

“Ah crap, now you CAN defeat my Kung Fu.”

Ugh, I really hate Anaado using Kyle’s powers for himself, and bragging about it! They’re not YOUR powers, Anaado, they never will be! Right now, I just want Anaado gone, seriously.

Why? Why did Anaado have to bring a hellworm carcass with him? Ew…

You should see his girlfriend’s She-Shed

THIS is news…..wonder what kind of monster his girlfriend is!

Now Aanado is starting to act like some sort of cat , don’t forget the dead carcass of your most recent mouse to drop at your master’s feet……never mind the fact that #1 you stole the power to kill it, and #2 you also zapped your master back to the weakest point in his existence……Aanado , YOU are still a power drunk Asshat!

I think I have a new guess where this is going: Anaado needs to learn that evil isn’t innate, but is a function of what people do with the power, resources, and opportunities available to them. Anaado does seem to be getting a little drunk on his newfound “power of a demon prince”, and is starting to act in a way that would be, I suspect, abhorrent to himself. If Spooky can get Anaado to realize that he’s becoming the very sort of creature he himself hates, Anaado will not only be more willing to give up the power, he might also be more willing to accept that Kyle, a demon prince, isn’t necessarily evil.

Its a good guess and its certainly possible. From what I have seen so far, Anaado seems like a total tool, with or without Demon Prince powers. All we can do is wait and see!! 🙂 🙂

Yeah, that seems to be very much what’s going on… and maybe where it’s headed?

So I’ve been reading in the comments about the fan theory that the spell used to de age Spooky is the same one used on Duncan. I have been so busy picking apart Anaado characteristically that I didn’t even notice that (shame on me). Its a good theory but when it comes to the whole memory thing, Anaado seems to want to torture Spooky by making him relive the whole thing in his younger body but with his experienced eyes, whereas Laampros really didn’t seem to care what happened to Duncan. I do think Duncan is faking it regardless, but Anaados use of the spell should be taken with a grain of salt when it comes to proof. 🙂 🙂

You’re not helping your case any Anaado.
*starts looking for a baseball bat to help wake Kyle up*

De-powering Spooky was really an act of self defense. Spooky has already once tried to exorcise Anaado. Another attempt may well have succeeded, now that he knows how powerful Anaado is. This was the gentlest way Anaado had of preventing that.

Well, seeing how powerful Anaado is with Kyle’s powers, at least they should have a good chance of surviving Hell. Even after all that Anaado has done, Spooky is still concerned about him. I’m really not liking Anaado at all anymore. It would be great if Spooky was able to reverse the de-age spell and get his magical abilities back. *crosses fingers

Are you suggesting……that Spooky fell asleep after *sex* and has somehow created this “nightmare” in his own mind?

bad dreams on an empty stomach

Yes, it’s possible.
I had the same sort of thought a few pages ago then the worm things appeared.

No spooky has some sort of Hammer space/ pocket universe we have never seen.
But its been mentioned and implied multiple times

its where he held those souls, and can hold vanquished demons. I

Its why Laampros wanted him dead. He sees him as both racially impure and as a threat.

Anaado could have taken over Spooky hammerspace the very same way we think he took over Kyles mind. ( that could be a trick )

It would make more sense.

Then everything would be a demon powered simulation, and if Spooky lets him Anaado could take over Spookys body in the real world.

( this comment was not meant to be spoilery of future pages. But since the prediction of this was already here… )

Then it also explains Annados vast powers! Anaado is partly possessing spookys mind. What spooky look slike and can do, ( and Anaados powers ) would be Illusions Anaado is creating.

This also explains why Spooky couldnt “break the spell” and free Kyle.

Spooky would easily be strong enough to overcome Annados power, provided he actually Knew what was happening, where he really was etc.

When Spooky realizes its an illusion and hes unconsious he can take back control.

This also explains why Annado would do something insane like go back to hell
( or how easy he opened a portal . This took a massive orgasm from Kyle before. )

and Spooky was confused and suspicious and oblivious of everything that’s happened and how it happened.

the MUch simpler hypothesis ( than Annado leveling up in knowledge and strength while being in prison ) is Annado is only using one power, Possession, through the connection he had with Spooky.

Which is more likely and parsimonious: Anaado has all these New powers that even spooky cant grasp at and is somehow possesing a Demon Prince, or

Okay. Once he gets out of this, Spooky needs to take a vow of chastity. 😀

Nah to get out of this — they have to smash again

As long as Spooky doesn’t use that particular spell again it shouldn’t be a problem.

Please Anaando, just …. Die ? Like, I don’t see any positive aspect of your personnality, it looks like you have a sociopathy problem, you’re guilt tripping spooky, a little bit more of power make you completly loose it, clearly you should do something for the narcissism. And damn juste give back what isn’t yours, Kyle is like, a better guy and I completly understand Spooky choosing him. Just… go away, psshhttt pshttttt.

Random bizarre (and silly) thought: Anaado has neither used an illusion to make Spooky think he’s been de-aged and de-powered (one of my theories) nor has he used the spell to physically de-age people which Laampros also used on Duncan (other people further down the comments page).

No, Anaado has used time displacement to swap Spooky’s adult mind into his younger body. This also means that somewhere in the past the younger Spooky has suddenly gained his adult body (and powers) and being unable to control them is running amok with magical pyrotechnics.

Oh, the damage that Anaado can do now that he’s stolen the powers of a demon prince 😛

Okay, that’s it for me. I’m off to role playing games. I’ll be back this evening after the page update. In the meantime, have some of this virtual halloumi cheese salad and enjoy camping.

I never thought of Spooky as a pyro….Kyle was the fire bender….the one who had the power to burn people who were “untouchable” (annihilator)
But to be able to run free at a very young age with a fully developed set of magical powers……might just be just as dangerous!

Hello Campers,
How will suddenly young Spooky cope and what will sort of magic will save him?

Hi y’all.
I made it to camp today, only to find out that I forgot to actually turn on the power to load, when I wanted to charge my tablet. I’m on 14% power, so won’t take too long to run out. Typical to forget on the one day I am super ready to camp. Will have to drop in here and there to check instead.

I accidentally blew up my disqus account today and missed lunch completely getting it fixed.
Some days I need to just not do electronic things.

Hi Doki. I see you have been quite the hunter in my time of less camping 🙂

Learned from the best!

another electronic flub — today is not my day

Page should be up shortly. 🙂